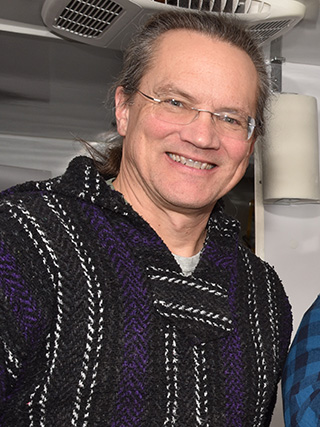 Dr. Bill Larson received a Bachelor of Science degree from Ohio State University in 1986 and graduated from Ohio State’s College of Veterinary Medicine in 1993. He moved to Washington state and began his career working as the staff veterinarian for several animal shelters in the Seattle area. While there, he developed an appreciation of the depth of the human-animal bond.

After five years in animal shelters, Dr. Larson changed direction and spent several years working in private practice. He maintains a close association with shelters and is a former board member of the Kitsap Humane Society. He has taught animal handling skills classes and performed spay and neuter surgeries for the Feral Cat Spay/Neuter Project.  In 2005, he traveled to Louisiana following Hurricane Katrina to work with displaced pets.

While in Louisiana, Dr. Larson began to think about and plan for opening a mobile clinic. A van would have been a tremendous help in a disaster, but more than that, it would be a great help to people who have trouble transporting their pets for any reason. On his return, he put his plans into action. Laboit Inc. of Columbus, Ohio built the clinic, and on September 5, 2006, Peninsula Mobile Veterinary Clinic, PS began seeing patients. Dr. Larson has thoroughly enjoyed the challenges of mobile practice and is looking forward to many years of providing veterinary care for pets in the West Puget Sound area.